The founder of Twin3d 3D scanning studio Alexey Belokopytov made a presentation on "Creating a character for gamedev using photogrammetry" at one of the main events in the field of computer graphics CGevent 2019. The conference was held from November 30 to December 01 in Moscow. The event was attended by over 1,500 people.

Among the attendees of the event were those who are professionally connected with computer graphics or are simply interested in digital art. The scientific program of the conference consists of reports and speeches on the most pressing topics. Round tables on hot topics, a section for developers, presentations by Russian and foreign artists, demonstration and discussion of works - all this is included in the conference program.

Alexey Belokopytov spoke about the advantages of creating characters using the photogrammetry method. He spoke in detail about all the stages of creating 3D models, shared his life hacks and details of the post-processing of a 3D scan. The report was accompanied by a large number of illustrative photos and video examples.

Alexey also told the audience about the plans for the further development of the studio related to the modernization of the scanner, as well as continuous improvement of the quality of the final mockups. At the end of the presentation, the conference participants were able to ask questions, as well as informally communicate on professional topics in between sessions.

CGevent is one of the largest events in the field of computer graphics in the CIS, more than a hundred performances, the best domestic and foreign speakers. The conference has been held annually in Moscow since 2006. The founder of the conference and the ideological inspirer of the event is Sergey Tsyptsyn. 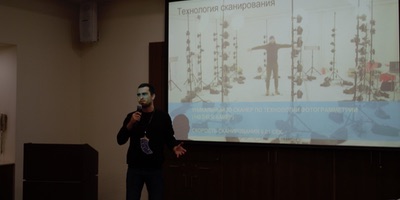